Secretariat-General of West Papua Army (WPA) has received direct information from the Supreme Commander of WPA Chief Gen. Mathias Wenda at the WAP Headquarters that there will be refugees coming into Vanimo through Wutung international road connecting West Papua and Papua New Guinea.

The number of refugees is yet to confirm.

Live broadcast of the event will be broadcasted at Facebook Page Called “Wim Awiyak“.

The Provisional Government of West Papua has announced the formation of a full cabinet commanding 12 government departments throughout the country. The newly-created departments, ranging from Green State Policy to Defense, deepen the challenge to Indonesia’s illegal occupation of West Papua.

After announcing the formation of the Provisional Government on December 1, 2020, the United Liberation Movement for West Papua (ULMWP) has been building up governance capacities inside the colonised territory. The latest move comes after President Jokowi ordered a ‘crackdown’ in West Papua in response to the killing of an Indonesian intelligence chief.

A number of prominent West Papuans inside the country have been appointed to the cabinet, led by Interim President Benny Wenda and the Interim Prime Minister. The ministers will cover the following portfolios:

Due to the intense political repression of the Indonesian regime, the names of the cabinet ministers are not being released. The departments are working underground in West Papua to undermine Indonesian rule from the inside. The Department of Foreign Affairs will command the ULMWP’s network of diplomatic missions across the world, including the EU, UK, US and Pacific.

The Department of Defense will command the united West Papua Army. The military commanders will include:

The commanders today announce their commitment to operating within international humanitarian law and the laws of armed conflict, and their support for a peaceful approach to resolving the conflict.

The announcement comes on May 1, the anniversary of the Indonesian invasion of West Papua in 1963, commemorated annually by the West Papuan people.

Interim President Wenda said: ‘On the 58th anniversary of the illegal Indonesian invasion of our country, we take another step towards reclaiming our homeland. We are forming the world’s first Green State, able to protect the rights and life of all beings in place of an Indonesian occupation that has murdered hundreds of thousands of my people. Human rights and climate justice will be at the heart of our Provisional Government.’ 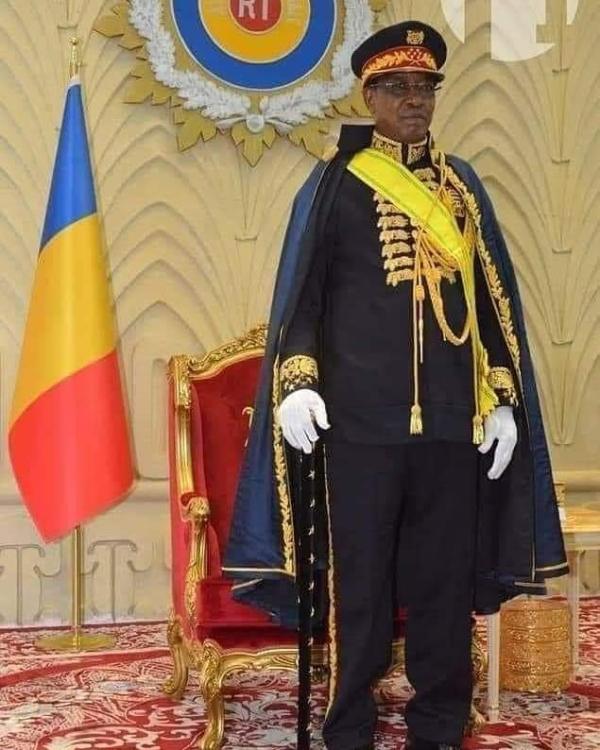 to the people of Chad and the family of the Late

Rest in Power Commander-in-Chief who died in Battle on this day 20th April 2021. On behalf of the Commnader-in-Chief of West Papua Army (WPA) Chief General Mathias Wenda and the People of West Papua, General Tabi urges the Provisional Government of West Papua to follow the example of the late Chad President.

General WPRA Amunggut Tabi stated in one of the briefings to his troops at the Central Headquarters of West Papua Revolutionary Army (WPRA) at Yako Village, Papua New Guinea that there are three poisons that have destroyed our campaigns to free West Papua, namely egoism, gossiping, and fear.

We have discussed the first poison in previous article. Now we look into the second poison called “Nabok-Kabok”, which literally means, talking about you and at the same time talking about me. This is the first social poison, stems from the first personal poison: ego.

There is hatred in gossip and there is lie in gossip, both caused by “an-an”, the previous poison that we already discussed. Gossip is groundless, baseless information about something against someone. The purpose of gossiping is to undermine someone that were are gossiping about, and demean whatever they do and even whoever they are.

In addition to lie and hatred in gossiping, there is also an element of slander in gossiping, i.e, spreading false information about someone else or something. Most gossip contain slander, but there are also gossip that contain truth. The problem here is the purpose of gossiping, not on whether or not the information is true or false.

There is no time to mention gossiping among West Papuan leaders, activists and organisations that has been happening along our independence struggle, but we want to focus on what is happening right now, per October 2020.

The list can continue to hundreds and even thousands of gossips spreading around Melanesians in West Papua. We call all these “gossips”, and many of them contain slander or defamation

Defamation (also known as calumny, vilification, libel, slander or traducement) is the oral or written communication of a false statement about another that unjustly harms their reputation and usually constitutes a tort or crime.

Free West Papua Campaign is full of slander, baseless and even false accusations that costed so many lives in the hands of fellow Melanesians. We have spent more time and energy spreading rumours and gossiping about each other than talking about Indonesia and what they are doing against our struggle.

Yes, the result of gossiping is division. And division is the goal of the Satan, Lucifer. As we recall the Biblical story, we see the Lucifer’s ambition to become the same as God has failed. His work to colonise human beings also failed because Jesus has died on the cross and has risen from the death, and has ascended to have, and have promised to come back to judge and throw him and his followers to hell, and take all believers to heaven.

Whenever there is gossiping, of course there is division. We recall the Biblical history. When Lucifer came to Eve, he started gossiping about God, by twisting some words from the Bible, which caused Eve to twist and then misinterpret the outcome of falling into the Devil’s trap. This gossiping aused deadliest separation between God and men. Human race fell into sin and became separated from God.

The Bible in Genesis 1:1-3 records the conversation between Eve and Lucifer as follows

Now the serpent was more crafty than any beast of the field that the LORD God had made. And he said to the woman, “Did God really say, ‘You must not eat from any tree in the garden?’ ”
2 The woman answered the serpent, “We may eat the fruit of the trees of the garden,
3 but about the fruit of the tree in the middle of the garden, God has said, ‘You must not eat of it or touch it, or you will die.’ ”…

The question from Lucifer added “any tree” even though God only said “only one tree” that human should never eat. In reply, Eve said, “…you must not eat of it or touch it, or you will die”. God never said anything about touching it, He spoke about eating it. There are additions to the truth. This brought about sin. This brought about division between God and human race.

Exactly the same pattern operates today in our lives, particularly in our campaigns to Free West Papua. When we add ingredients to our cooking, then the taste of the food changes from its original pure taste into new taste, from united, loving and kindness in Jesus Christ, as fellow human beings and fellow Melanesians into division hatred and even threat to each other.

What a game we are in!

Psychologically, the basis for gossiping is still the same, “the ego”. We are in service to our own ego

And the outcome of gossiping is also the same “we fall into sin”, we commit sin, we become sinners. It divides us up, it indicates that we are not trustworthy, it shows that we are murderer, we have wickedness in our hearts, we are full of hatred against others.

And the outcome of gossiping is we exhaust our energy, we waste our energy and finally we reach nothing but hatred, division and failure.

“Ego” is the source of slander and gossip. Ego is the mother of gossiping. Spreading unsubstantiated and false information about others serves the ego of the person spreading it, talking about it, and enjoying it.

In other words, anybody or any leader who are not egocentric will never spread rumours and engaged in gossiping about other leaders, fellow Independence fighters.

It was mentioned before that “gossiping” is a poison, but it is actually a disease. “a disorder of structure or function in a human, animal, or plant, especially one that produces specific signs or symptoms or that affects a specific location…” <https://languages.oup.com/google-dictionary-en/&gt;

The famous Wikipedia, the free encyclopedia, “A disease is a particular abnormal condition that negatively affects the structure or function of all or part of an organism, and that is not due to any immediate external injury.” <https://en.wikipedia.org/wiki/Disease&gt;

“Nabok-Kabok” is a social decease, stems from poison number 1: the “ego”. It is a personal poison, that produces a social poison called “nabok-kabok”.

The outcome of this disease creates a new poison called “slander, rumours and gossip”. So gossip become poison when the people who gossip become addicted to it, and then become used to gossiping, and finally they “enjoy gossiping”.

As stated above, Lucifer crated gossip about what God has said about fruits in the Garden. Even also said something in addition to what God really said. This turns and shifting from truth into gossip created division between God and human. The same formula applies to human lives. When we spread rumours, create slanders, start gossiping each other, we are creating a social disease called “division”.

The term “nebi-kebi” in Lani language means, I do not like you and you do not like me, I hate you and you hate me. This creates what Indonesians called “musuh dalam kelambu”, i.e., enemies in our own sleeping nets.

“Nebik-Kebi” comes from the Seed called “Ego”, through the root called “Fear”, into the Stem Called “Nabok-Kabok” that BRINGS ABOUT “DEath”

The cause and effect continues, “nebi-kebi” causes hatred and other destructive and deadly minds, rhetoric and actions. “Nebi-kebi” can cause killing each other among fellow independence fighters.

Now is YOUR JOB Readers

Pay close attention to their choice of words, their attention, their gestures or their logic. Look at what they say,

This to avoid in this kind of exercise are as follows:

Land and sea access between Indonesia and Papua New Guinea has been closed after a shootout at the border.

This follows reports of an Indonesian troop build-up along the border from communities in PNG’s West Sepik province.

Indonesian-ruled West Papua has been gripped by weeks of protests and violent unrest which has left dozens of people dead.

Amid a security forces crackdown, concern has been raised in neighbouring PNG about another potential influx of West Papuan refugees

PNG’s Immigration and Citizenship Authority has advised that following a shootout the border is closed to nationals from both sides until further notice.

It said shopping at the Batas market, close to the border on the Indonesian side, as well as movement into the West Papuan capital Jayapura was “completely banned”.

Earlier this week, PNG’s EMTV reported villagers at Wutung on the PNG side of the border as saying school children were ordered to return home.