Dansi Oearupeu Francis Ona died in May 2005. He was an inspiration to many, Francis stood up against Rio Tinto, the Australian government and PNG in order to secure a way of life free from exploitation by foreigners. Only by securing the land and environment, could Bougainville regain the harmony and balance that has been […]

Gen. Amunggut Tabi says such a statement clearly indicates Indonesian people the Nazi of this era. Not many people in the world realize this. The Indonesian government have long practiced apartheid in West Papua and across Indonesia. This is real in the South Pacific, and that Indonesia sees all non-Malays in South Pacific as “non-humans”.

West Papua Army fights in defending the dignity and integrity of all black, white, red, green, and any colours as human beings, with the same and equal rights to be fully recognised and treated as fellow human beings. Therefore, we condemn Indonesian Nazi community and apartheid government in West Papua.

The West Papua Revolutionary Army (WPRA), an affiliate command of the West Papua Army (WPA) hereby would like to congratulate the victory that West Papuan peoples have just achieved in the Pacific Island Forum (PIF) this week.

The key members of the United Liberation Movement for West Papua (ULMWP), the Chair Benny Wenda, Spokesperson Jacob Rumbiak and Treasurer Paula Makakobry were all present at the meeting.

The issue of West Papuan human rights violations is getting full attention at the South Pacific level, where the PIF has an official voice at the United Nations body.

“This is a victory that all Melanesians should remember. We have won politically at the MSG level, and we are now stepping upward, stepping forward, and stepping at wider levels of our politics and diplomacy.

This is the time for us all to thank God for what the Most High Revolutionary Supreme Commander is doing through His interventions. All Melanesian leaders who do not support this struggle will be kicked out from Melanesian politics. Those who speak for the cause will enjoy their lives in this body and after they die.”

Gen. Tabi closes his statement by saying that there will be more victories to come, and therefore Malenesians in West Papua should be ready to celebrate and thankful to God.

Issued at: Central HQs of the WPRA

The ULMWP Announced the formation of WPA on July 1st, 2019

Be known to the world that a United Military Command for a Free and independent Nation-State of the Republic of West Papua has been form on May 1, 2019 that we call the May 1 Declaration of West Papuan Peoples.

This announcement was made by the Spokesperson of the United Liberation Movement for West Papua (ULMWP) Dr. Jacob Rumbiak in Australia.

The Summit was held at Yako Village, nearby Vanimo Town, Sandaun or West Sepik Province of the Independent State of Papua New Guinea. 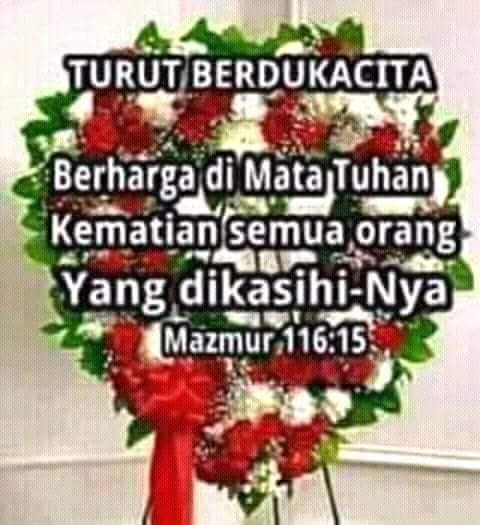 This note ays that OPM was never been set up with Constitution, but only by wording, any organisations campaigning for West Papua independence is called organisation for Free West Papua, or Organisasi Papua Merdeka (henceforth OPM). There is no by-laws or legal product that ever been produced by anyone in the Free Papua Movement explaining about the “OPM”.

It says clearly in the FPB bylaw that OPM )Organisasi Papua Merdeka) has never been established so far therefore, there is a need to establish FPM, which was formed on July 15, 1977.

In July 1, Constitution of the Provisional Government, there is no mention at all about the name OPM, or any other organisation at all.

Another important point to note is that both Provisional Revolutionary Government of TPN/ Marvic/ Roemkorem is still exist to this date, which according to Port Vila Declaration between Prai and Romekorem was assigned to handle the military campaigns of the Free Papa Movement. Whereas the PEMKA, de-facto party of Jacob Prai was assigned to deal with political matters to free West Papua.

The author’s legal perspective suggests that there is a need to reconcile, legally with political decisions by this generation to both implement the Port Vila Declaration with the history that we have created along our struggle, and at the same time not going back to the past but move forward with the current political breakthroughs and events evolving in this generation in order to not only legally maintain the constitutionalism of our movement but also to catch up with the current development and trends in order to win the battle.

On one hand, there is clearly an urgent need for all West Papuan independence fighters and organisations to be consistent and at the same time constitutionally rational in following up the struggle to free West Papua. There is a need to re-visit the history and re-position newly formed organisations within the context of our history.

On the other hand, all parties need to understand what is happening today as phenomenon that needs space and management to open the dialogues and consolidation.

One thing is obvious, we cannot undo all that have happened so far, but another thing is also clear, that we need to embrace all parties without forgetting the history of the struggle and legal aspects of all of our organisations and activities.

We are pro-longing our way into a free and independent West Papua, not the Malay-Indos. 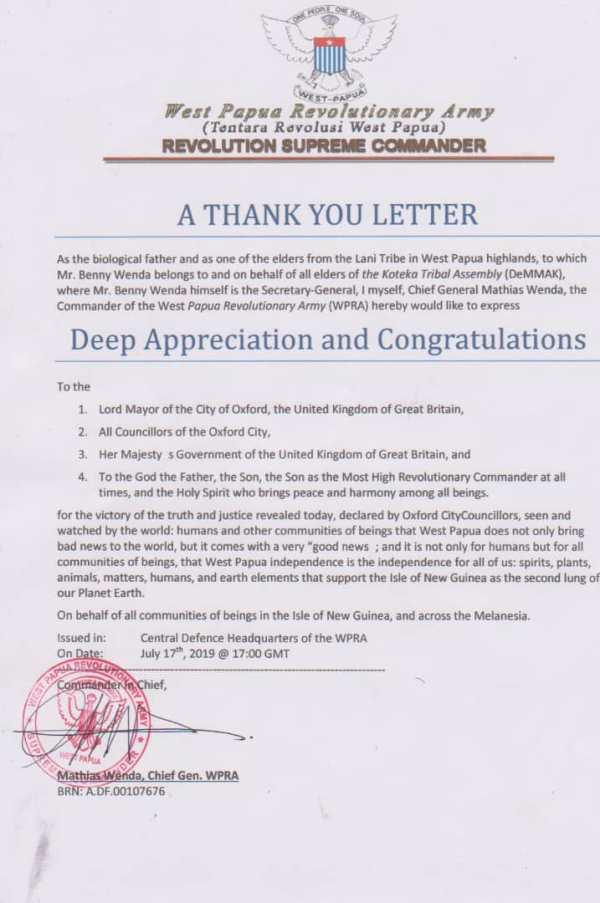 General WPRA Mathias Wenda Congratulates Hon. Benny Wenda and Thanks the Government of the United Kingdom of Great Britain

Chief General Mathias Wenda, the Commander of the West Papua Revolutionary Army (WPRA) as the father of Mr. Benny Wenda and as one of the elders of Lani Koteka Tribes General Wenda expresses thanks and deep appreciation to the Mayor of Oxford City and the Councillors of the Oxford City as well as Her Majesty’s Government of the United Kingdom of Great Britain.

As the Secretary-General Koteka Tribal Assembly or Dewan Musyawarah Masyarakat Adat Koteka – DeMMAK) and the Chair of the United Liberation Movement for West Papua (ULMWP), Honourable Benny Wenda has been awarded “The Freedom of Oxford” symbolizing the recognition from the one of the oldest city councillors in the world that the cause of a free and independent West Papua is democratically justified, according to the universal human rights principles and should be supported by world powers.

Hon. Benny Wenda has been promoting human rights and self-determination of the West Papuan peoples though an international Supervised Vote in West Papua, supported by Parliamentarians in England, Europe, Melanesian countries and African-Caribbean countries.

Hon. Benny Wenda is envisioning a free and independent Republic West Papua applying what his previous Freedom of Oxford City Award Winner, the Late Nelson Mandela’s Tribal Model of Democracy where the principal leaders are guiding the people from behind the crowd, not leading in front. 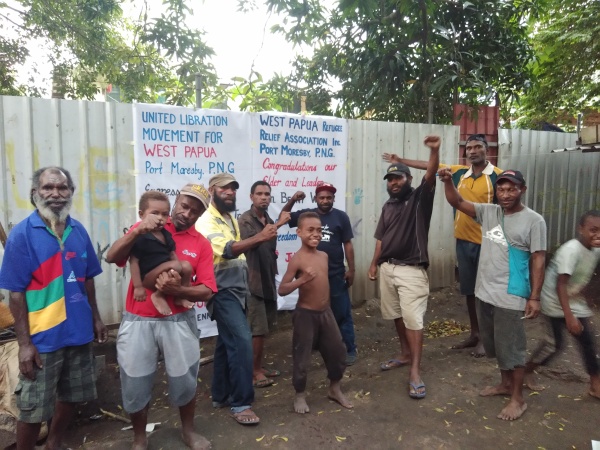 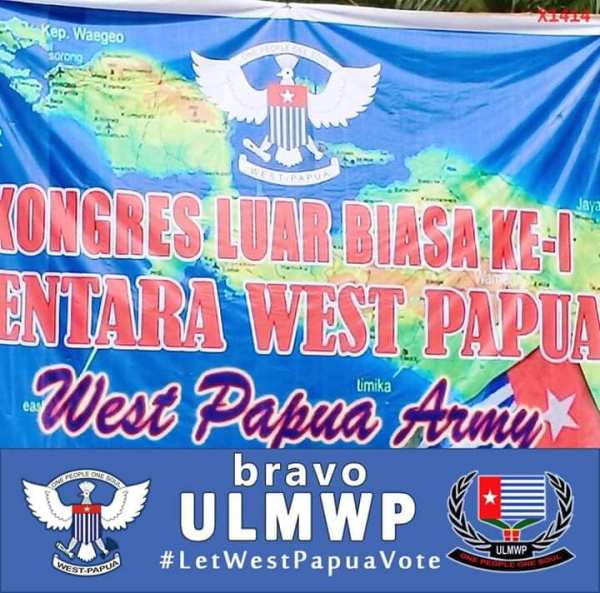