On Tuesday 1 June 2021, about 7:30 AM, Free West Papua activiest and member of the United Liberation Movement for West Papua (ULMWP) has hunted by the Indonesian Army and Police (TNI/ Polri) in Post 7 Sentani, West Papua, however, he was not found in place.

Therefore reacted brutally and arrested two other family members of his and taken to Jayapura town,

In arresting them, the police kicked open the doors and searched into the house with force, confiscated goods in the house, including 1 laptop, 4 flash drives, 2 flash disk, 3 mobile phones and 1 bag. They also confiscated some documents.

Last night they were still held by the police in Jayapura Town.

This information is updated in order to let all Melanesians know and all human beings to react upon massive and systematic human rights violations happening in our eyes in West Papua right now. 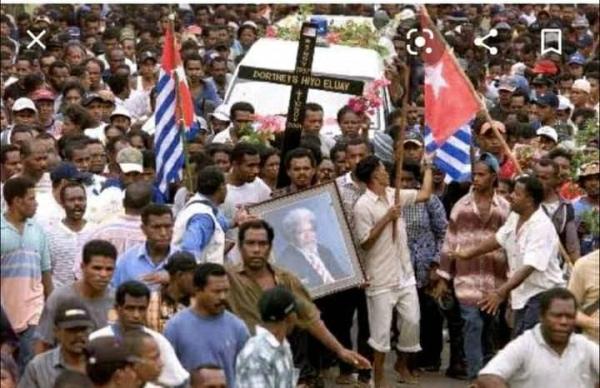 An Indonesian church group has urged President Joko Widodo to order an independent investigation into the killing of a priest in the rebellious Papua province.

Local church leaders said Yeremia Zanambani was shot dead by Indonesian soldiers who were hunting separatist rebels in Intan Jaya district on Saturday, but police and the military said he was killed by insurgents.

“It is not easy for us to get to the bottom of this,” said the Communion of Churches in Indonesia in a letter to Joko, a copy of which was received by dpa.

“To avoid accusations and counteraccusations, we suggest that an independent fact-finding body be formed,” it said.

The Indonesian Gospel Tabernacle Church in Papua said Zanambani, a priest and theologian by training, was shot by government soldiers while tending to pigs on his farm.

Papua police spokesman Ahmad Kamal confirmed the killing but said the perpetrators were what he called “the armed criminal group,” referring to the rebels.

The West Papua National Liberation Army, the armed wing of the separatist movement, claimed responsibility for the killings.

It said that the civilian was an informant for security authorities.

Papua has been the scene of a low-level separatist insurgency since the 1960s.

Clashes between separatist rebels and government security forces have intensified after insurgents killed 31 workers who were building a road in Nduga district in December 2018.

Only if the Indonesian army (TNI) and police (Polri) continue to kill students and unarmed civilized on daily basis, unstopped by international civilized community then West Papua Revolutionary Army (WPRA) will retaliate.

Recent deployments of active military and police troops, equipped with fire arms to kill Melanesians in West Papua clearly indicate that Indonesia is declaring war against Melanesians. All Melanesian leaders must united now, because we are defending our human dignity and integrity. We are not just fighting against foreign occupation, but more than that, these military might has been undermining God created human beings in His own Image by calling us Melanesians “monkeys”, “pigs” and “dogs”.

The world should note that it is Indonesia that love violence, love killing, and Indonesia is NOT a democratic country, but it is fully controlled by military might that terrorize Indonesian civilians.

the brutal unlawful shootings against un-armed students and civilians who are demonstrating against violation of human dignity by Indonesian TNI and Police officers as well as Indonesian teachers calling Melanesians as “monkeys”.

This time the shootings and killings happened in Wamena and Jayapura on 23 September 2019, adding the numbers to hundreds of thousands of Melanesians, man, women and children, young, adult and children, male and female.

This Nazism of Indonesia and inhuman government should end its occupation over the Republic of West Papua and the international community must respond to humanitarian crises happening for so long.

Issued at: Central Headwaters of WPRA
On Date: 24 September 2019

Human rights activists have demanded that President Joko “Jokowi” Widodo form an independent team to probe a shooting in Paniai, Papua, that claimed the lives of at least five civilians and wounded 21.

“President Jokowi should form an impartial team to thoroughly investigate the shooting incident so as to avoid the blame game among law enforcers and civilians,” said Rev Neles Tebay, coordinator of rights group Peaceful Papua Network.

The shootings occured around 10 a.m. on Monday when security personnel allegedly attempted to disperse a crowd that had gathered and was dancing in Karel Gobai field in Madi district, Paniai.

Witnesses said the residents were performing the waita tribal dance after setting fire to a black SUV believed to belong to a group suspected of assaulting residents assembled at a Christmas event in Ipakiye village, East Paniai.

Police from a nearby station arrived at the field to disperse the crowd. When the crowd continued dancing and did not disperse, the police fired into the crowd.

Rev Neles said the independent team should also track down the driver of the SUV that had provoked residents. He added that the case required a clear resolution since Paniai regency had seen frequent shootings since 1969.

The Papua police have denied involvement in the incident, saying that before the incident occurred, residents blocked roads and disrupted traffic in Enarotali city.

As the police were trying to negotiate with residents to cease the disruption, they heard gunshots from the nearby hills.

The case is currently under police investigation.

The Indonesian Military’s (TNI) Army chief of staff, General Gatot Nurmantyo, agreed with the police’s account of the incident and denied any TNI involvement.

“As far as I know, there were no police or soldiers in the hills. However, it is known that [members of the pro-independence Free Papua Movement] often hide in the hills or the forest. We should check and investigate whether it is true or not,” he said on the sidelines of a peacekeepers departure ceremony at TNI headquarters in Cilangkap, East Jakarta.

Speaking to reporters this week after accompanying President Jokowi to Halim Perdanakusuma Airport prior to his departure to South Korea, Coordinating Political, Legal and Security Affairs Minister Tedjo Edhy Purdijatno said there should be an investigation into where the bullets had come from.

“The gunshots did not only come from the side but also from above. We have to see where they came from. Don’t just blame the law enforcers,” he said.

Tedjo said that the situation in the area was now calm.

“I’ve spoken with the [local TNI] commander and there have been talks with the local community,” he added.

“It has been suggested that [the conflict] could be settled by performing a traditional ceremony, for example the rock-burning [ceremony].”

The rock-burning ceremony — where food is cooked with the heat of hot rocks placed in a hole in the ground covered by leaves and grass — is an age-old ritual among Papuan tribes.

Nani Afrida contributed to this report for The Jakarta Post.

Indonesia police and military brass are reportedly distancing themselves from blame for the shooting of the five young West Papuan civilians in the highlands region of Paniai.

Four men were killed and over a dozen injured when security forces, both police and military, allegedly opened fire on a crowd on Monday that was protesting at the Karel Gobai field located near the Paniai District Military Command.

A fifth man died from the bullet injuries a few hours later in hospital.

The Age online reports that Jakarta-based leaders of both the army and police are denying responsibility for the shooting.

The national police chief Sutarman said on Wednesday it was not the police.

A Jakarta-based military counterpart, army chief of staff Gatot Nurmantyo, speculated that, instead of being fired by the armed soldiers and police officers in front of the protesting crowd, the fatal shots came from the top of a hill behind them.

He said he had heard from from the Papuan police and military that shots were coming from the top of the hill.

Mr Nurmantyo said he was certain there were no members of the military or the police on the hill.

Meanwhile, an investigation has been launched and will be run by a team headed by the Detective Head of the Papuan police, senior commissioner Dwi Iriyanto.